Venice is divided into six zones that have distinctly different characteristics. San Marco is the central zone, surrounded on three sides by the great loop in the Grand Canal. Over Rialto Bridge is the artisans' zone of San Polo, and across the Grand Canal to the south is Dorsoduro, with its prestigious art museums.

At the outer edges of Venice you will find Santa Croce, Castello, and Cannaregio, home of the original Ghetto. Beyond the six zones of the city itself, you'll find the magical Lido, Murano, Burano, Torcello and San Giorgio Maggiore.

Venice's most famous church, and one of the most recognisable in the world, St. Mark's Basilica (Basilica di San Marco). Originally the Doge's private chapel, decorated with Byzantine art treasures that are part of the loot brought back by Venetian ships.

4,240 square meters of gold mosaics cover the domes and walls. The magnificent golden altarpiece Pala d'Oro, which is one of the finest in the world, was begun by early 12th-century artists, and centuries later, adorned with nearly 2,000 gems and precious stones. 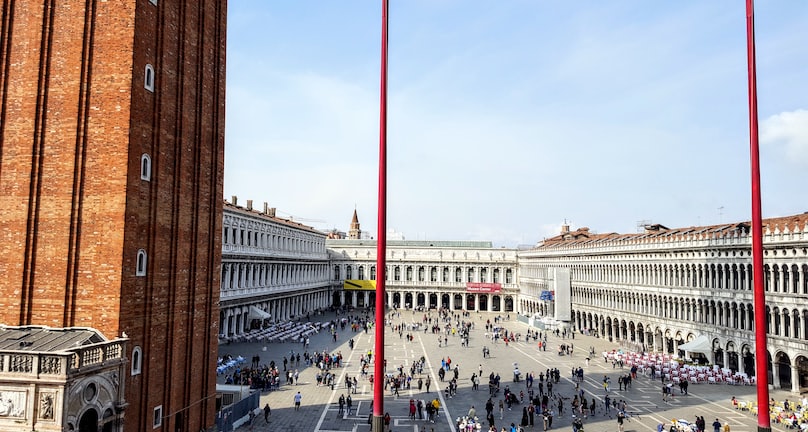 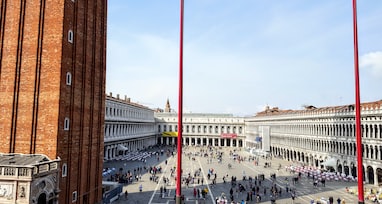 Piazza San Marco, often known in English as St Mark's Square, is the principal public square of Venice, also known as la Piazza. Piazza San Marco is known as Venice's living room, the place everyone gathers to drinks coffee and meets friends. Caffè Florian born in Venice in 1720 is the oldest Café in the world situated under the arches of the Procuratie Nuove in Piazza San Marco.

Three sides are framed in arcades, beneath which are high end shops and fashionable cafés. Above it towers the brick shaft of the campanile. For overviews of this busy piazza, you can go to the top of the Torre dell'Orologio, where a pair of "Moors" strikes the hour.

The Doge's Palace 'Palazzo Ducale' is a palace built in Venetian Gothic style, and one of the main landmarks of Venice. The palace was the residence of the Doge of Venice, the supreme authority of the former Republic. It was built in 1340 and extended and modified in the following centuries. It became a museum in 1923.

Entering through the Porta della Carta, which is a perfect example of Venetian Gothic architecture, and ascended the monumental Scala dei Giganti and the gold-vaulted Scala d'Oro to be received in what many consider to be the palace's most beautiful chamber, Sala del Collegio. You'll see works by all the Venetian greats, including Tintoretto, whose 'Paradise' is the largest oil painting in the world. 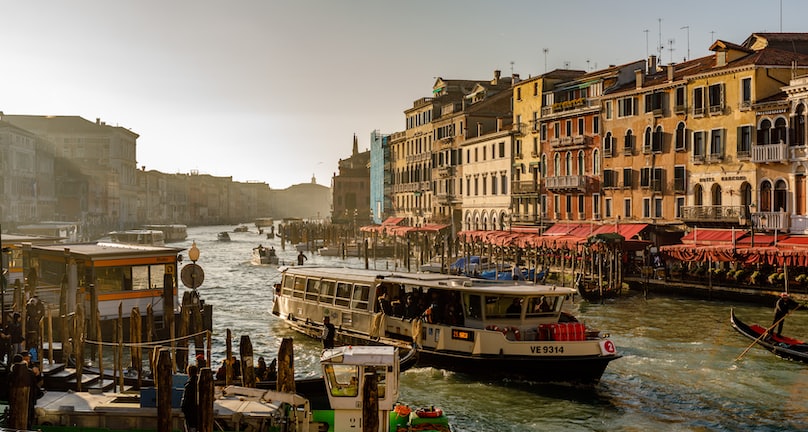 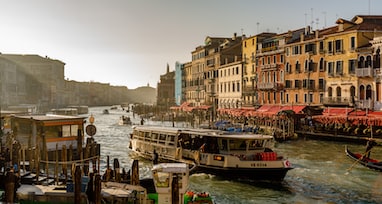 Flowing through the heart of Venice in a giant reverse S curve, the Grand Canal is the principal Water highway through the city, connecting Piazza San Marco, Rialto Bridge, and the arrival points from the mainland. Slightly more than 3 km (2 miles) long and between 30 and 70 metres (100 and 225 feet) wide, the Grand Canal has an average depth of 5 metres (17 feet) and connects at various points with a maze of smaller canals.

The Grand Canal was the address of choice for anyone who claimed any influence in Venice through the ages, with palace doors opening onto the water way. These grand palaces are well preserved today, and a trip along the canal by gondola is the best way to see them. Traditional poled gondolas are a favourite but are now vastly outnumbered by motorized public-transit water buses (vaporetti) and private water taxis. The Grand Canal is lined on either side by palaces, churches, hotels, and other public buildings in Romanesque, Gothic, and Renaissance styles.

The Rialto Bridge is the oldest of the four bridges spanning the Grand Canal in Venice, Italy. Connecting the sestieri of San Marco and San Polo, it has been rebuilt several times since its first construction as a wooden pontoon bridge in 1173. Once the only bridge across the Grand Canal, Rialto Bridge marks the spot of the island's first settlement, called Rivus Altus (high bank). Built in 1588, after the collapse of a previous wooden bridge, this stone arch supports two busy streets and a double set of shops. Designed by Antonio da Ponte, began to be constructed in 1588 and was completed in 1591